ARIADNE – a program estimating covariances in detail for neutron experiments

The python program ARIADNE is a tool developed for evaluators to estimate detailed uncertainties and covariances for experimental data in a consistent and efficient manner. Currently, it is designed to aid in the uncertainty quantification of prompt fission neutron spectra, and was employed to estimate experimental covariances for CIELO and ENDF/B-VIII.0 evaluations. It provides a streamlined way to estimate detailed covariances by (1) implementing uncertainty quantification algorithms specific to the observables, (2) defining input quantities for typically encountered uncertainty sources and correlation shapes, and (3) automatically generating plots of data, uncertainties and correlations, GND formatted XML and plain text output files. Covariances of the same and between different datasets can be estimated, and tools are provided to assemble a database of experimental data and covariances for an evaluation based on ARIADNE outputs. The underlying IPython notebook files can be easily stored, including all assumptions on uncertainties, leading to more reproducible inputs for nuclear data evaluations. Here, the key inputs and outputs are shown along with a representative example for the current version of ARIADNE to illustrate its usability and to open a discussion on how it could address further needs of the nuclear data evaluation community.

At the “CW2017” workshop, progress on covariance estimation for and evaluation of prompt fission neutron spectra (PFNS) was shown. One key point was that estimating experimental covariances in detail versus extracting total uncertainties from EXFOR [1,2] and using simplifying assumptions for the total correlations may results in significantly different evaluated PFNS, benchmark calculations and associated uncertainties. For instance, the effective multiplication factor, keff, of the Jezebel critical assembly changes by nearly 200 pcm if a detailed versus a simplified experimental covariance matrix is used as input for an evaluation of the 239Pu PFNS induced by neutrons of 500 keV [3]. This change is significant, given that a difference of 270 pcm in keff of a Plutonium system can lead from a controlled to an uncontrolled reaction.

Given that a detailed uncertainty estimate for experimental data may significantly impact evaluations and application calculations, the python program ARIADNE was developed to estimate experimental covariances for evaluation purposes in detail in a consistent and streamlined manner. This program was developed concurrently and partially in support of work for the IAEA coordinated research project on PFNS [4], and was subsequently used to provide input for CIELO [5] and ENDF/B-VIII.0 [6] 235U PFNS evaluations [7]. ARIADNE was designed such that documenting the experimental covariances is straightforward. All assumptions in the estimation process are explicitly stored in ARIADNE input decks and the output is given in GND format [ 8] (as example the documentation for experimental 235U PFNS covariances is given in Ref. [9]). This feature should support guaranteeing the reproducibility of (evaluated) data – a fundamental principle of science which is often violated as rarely all input used to generate evaluated data is readily available for the whole community. Therefore, ARIADNE could provide input for the WPEC Subgroup 44 on “Investigation of Covariance Data in General Purpose Nuclear Data Libraries” [10] on guidelines how evaluators can document their evaluations.

The ARIADNE input parameters, assumptions and data can be transparently stored in an IPython or Jupyter notebook. From this notebook, ARIADNE will be run and the output plots and data files will be automatically generated. These notebooks can be easily exchanged between evaluators and can be converted to LaTeX or pdf format and thus facilitate the documentation of the input assumptions for estimating experimental covariances.

For estimating total covariances for measured PFNS with ARIADNE, it needs to be specified whether the data are “shape”, “shape ratio” or “shape ratio calibration” data. In a shape measurement, the detector efficiency is determined explicitly, while in a ratio experiment the detector efficiency cancels as the measured ratio data were measured with the same detector. In a ratio calibration measurement, the detector efficiency is obtained by a measurement of the monitor PFNS and using a numerical representation for this measured PFNS. It is important to specify which measurement type PFNS data belong to as different uncertainty sources need to be considered for specific measurement types and the actual algorithms to estimate total covariances differ as outlined in Section III.M of reference [4]. For instance, if a time resolution of 1 ns for a time-of-flight (TOF) length of 1 m is converted to an uncertainty relative to the PFNS using a Maxwellian temperature of 1.33 and 1.42 MeV for the investigated and monitor isotope, the resulting uncertainties are distinctly different in Figure 1 depending on what data type is used. The time resolution uncertainty relative to the PFNS substantially reduces for shape ratio data compared to shape data while the time resolutions of the investigated and monitor isotope measurement need to be considered for shape ratio calibration data leading to increased uncertainties compared to shape data.

The covariance estimation algorithms presented in Section III.M of reference [4] were implemented in ARIADNE to estimate total covariances for PFNS experimental data. The algorithms are summarized in the Appendix of this paper for the sake of completeness and to link the ARIADNE input quantities defined below with the algorithms in reference [4].

general_info: This dictionary contains general information specifying the observable, naming the dataset, the output files/folders and some documentation. For the following keys, values need to be provided:

data: This dictionary contains the data of the dataset with the following keys:

where the constant damping factor c with values between 0 and 1 is defined with the key damp_term in the dictionaries eout_unc_type_arg or type_arg. In addition to c, the energies Eout of the PFNS need to be provided with the keyword “eout” with the same dictionaries. The correlation matrix “Gaussian-Anticorrelated” is very similar to the one termed Gaussian,

except for the matrix Ai,j with matrix entries of 1 if the energies

are both either larger or smaller than Et and −1 otherwise. The values of c and

are provided as described above. In addition, Et is provided with the key “eout-turningpoint” with the same dictionaries.

trsl: This dictionary contains all information necessary to estimate uncertainties due to the finite time resolution for a PFNS measurement with keys:

maxw_t_iso: This dictionary contains information on the Maxwellian temperature fitted to the measured PFNS. This information is necessary to convert TOF length uncertainties or a time resolution in length units into uncertainties relative to the PFNS which is an essential steps towards generating a total PFNS covariance matrix. The keys are:

maxw_t_ref: [only ratio and calibration measurements] A dictionary containing the same information as maxw_t_iso except for the monitor isotope.

unc_iso: This dictionary contains partial uncertainties for the PFNS measurements as well as information necessary to estimate their correlation matrices. The keys are:

unc_ref: [only ratio and calibration measurements] A dictionary containing all the information given in unc_iso for the monitor isotope instead of the isotope in questions as well as the following keys:

reference: [only ratio and calibration measurements] This dictionary contains the information necessary to specify the monitor isotope, reaction and the nuclear data which should be used to convert ratio PFNS to PFNS. The keys are:

ARIADNE automatically produces the following output in the folder specified with the variable output_folder:

2.4 Assembling a database as input for evaluations

As example, it is shown how total covariances for the 235U PFNS analyzed by Lestone et al. [14,15] are estimated using ARIADNE . This particular dataset was chosen as only nine data points are provided leading to a relatively small XML-output file which can be easily shown here. Also, the uncertainty sources listed in the input deck shown in Figure 2 can be easily aligned with partial uncertainties given in reference [15] for Lestone et al. PFNS.

Apart from the figures, a GND formatted XML output file as shown in Figure 6 is produced. It not only provides incident and outgoing neutron energies, PFNS, total relative uncertainties and correlations, but also unambiguously specifies the data as experimental 235U PFNS and provides a documentation.

Right now, ARIADNE was developed to estimate covariances for PFNS experiments. Currently, no openly available tool exists specifically designed for detailed covariance estimates for experimental PFNS data while IAEA tools connected to EXFOR exist which help in estimating covariances for neutron induced cross-sections [16]. ARIADNE streamlines the detailed uncertainty estimate – usually a time and labor-intensive procedure – by providing algorithms for estimating PFNS uncertainties for typical PFNS measurement types [4], converting data given as ratio to a monitor PFNS into PFNS data, providing shapes of typical correlation matrices for partial uncertainties and automatically producing from this information total covariances, plots and GND formatted XML and plain text output files. The program relies on input for partial uncertainty sources, information on their correlation as well as important parameters of a PFNS measurement (e.g., time resolution, TOF length). Hence, while ARIADNE facilitates and fastens the uncertainty process, the evaluator still has to extract and identify uncertainties from EXFOR entries and the literature of a dataset.

ARIADNE is written in python and its input files can be stored as IPython or Jupyter notebooks. These input files can be easily exchanged between evaluators and converted conveniently to LaTeX or pdf format for documentation purposes. Given the straightforward possibilities to document the experimental database entering an evaluation, ARIADNE can help in making evaluations more reproducible given that experimental covariances entering evaluations are still rarely documented.

Currently, ARIADNE is being updated to estimate total covariances for neutron-induced fission cross-section data. It is planned that an additional layer is added to ARIADNE which requests typically uncertainty sources encountered in PFNS and fission cross-section measurements as listed in references [4,17]. This additional layer should help evaluators in identifying missing uncertainty sources for a particular experiment. A range of typical uncertainties might be provided to help estimating missing uncertainties. Also, a function identifying possible cross-correlations between uncertainty sources of two different experiments will be developed. Once, these parts are finished, steps will be undertaken to release the LANL ARIADNE code as open source program to the nuclear data evaluation community.

This work was carried out under the auspices of the NNSA of the U.S. Department of Energy at LANL under Contract No. DE-AC52-06NA25396.

The algorithm to estimate total covariances Cov(Nk, Nj) associated with PFNS values Nk and Nj at lattice points k and j are described in detail in Section III.M of reference [4] and are summarized here briefly:

(1) The PFNS values Nk and Nj are provided as input with the key “values” in the dictionary “data”. The variable

corresponds to the uncertainties associated with the nth uncertainty source for the measurement of the isotope in question (hence superscript i) given relative to the experimental quantity (e.g., Nk for shape data). In ARIADNE,

is provided as input for dictionary “unc_iso” with key “values”. In the current notation, “units” would be a vector of n strings with “%”. The correlations

of uncertainty source n are specified with the keys “type” and “type_arg” in dictionary “unc_iso”. The term

provides covariances for uncertainty sources of and given relative to the reference measurement (superscript r). This term is non-zero for shape ratio and shape ratio calibration measurements and

are provided as input for ARIADNE with the dictionary “unc_ref” analogously to “unc_iso”. The term

is provided in the dictionary “reference”.

for energy, time resolution and TOF length uncertainties, respectively, for shape data are given by: 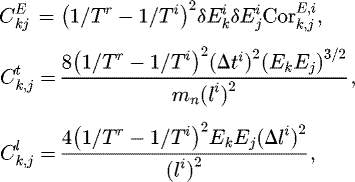 (3) with the Maxwellian temperature Tr of the reference PFNS provided with the dictionary “maxw_t_ref”.

For shape ratio calibration data, energy uncertainties, time resolutions and TOF length uncertainties need to be provided for the measurement of the isotope in question and the reference measurement. Hence,