Zirconium-based alloys are widely used for nuclear reactor components such as fuel claddings, grid spacers and guide tubes. These alloys combine low neutron absorption behaviour and good mechanical and corrosion properties under operating conditions. However, rapid oxidation of the fuel cladding occurs under loss of coolant accident (LOCA) conditions due to the zirconium-steam reaction. The oxidation is accompanied by intensive hydrogen production. The oxidation causes the mechanical deterioration and the embrittlement of the cladding. Nevertheless, the oxidation correlations of most computer codes simulating accident scenarios today mainly rely on Zircaloy-4 data. It is noted that almost all the computer codes in current use assume a parabolic kinetic law, i.e. mass gain is proportional to the square root of time.

In VVER nuclear reactors, the niobium-bearing alloy E110 (Zr1%Nb) is used for cladding and structure materials. This material has been extensively investigated too, mainly in Russian and Eastern European laboratories, but the publicly available data are scarce (Böhmert et al. [1]; Yegorova et al. [2]; Bibilashvili et al. [3]).

Comparative studies show superior resistance to oxidation of either E110 or Zry-4 depending on test conditions, especially on temperature and atmosphere. Recently, numerous separate effects tests on high-temperature oxidation of various cladding alloys, including E110 and Zry-4, in different atmospheres have been conducted (Grosse [4]; Steinbrück et al. [5]; Hozer et al. [6]) in Germany and Hungary.

All samples examined in this study were fabricated of the modified E110 alloys with improved oxidation properties (fabricated from Zr sponge). The chemical composition is presented in Table 1. The tested tubular specimens had the following dimensions: outside diameter 9.1 mm and wall thickness ∼686 μm. Thirty or 45 mm long non-irradiated segments were cleaned, degreased, and then weighed. After the preparation procedure the specimens were exposed to steam (0.1 MPa) at constant temperature (600–1300 °C) for variable time interval (0–480 min depending on the temperature) in a resistance furnace. Tests were conducted with average steam flow rates of 0.61 g/cm2/min (deduced from water consumption). A single sample was exposed at a time. The oxidation was double-sided. The sample temperature was measured by a thermocouple placed inside the tube. After the high-temperature oxidation, the samples were quenched in ice water and dried out at 80 °C, and then weighed. Oxidation procedures were carried out with no applied stress.

The chemical composition of the studied materials.

Based on weight gain of exposed samples, a new model was developed. More than 800 experimental points were evaluated. For each temperature in the range 600–1300 °C, optimal power-law functions were set in the form (Fig. 1)

The coefficients k and n based on interpolation (least square method) for some temperatures also depend on the maximal considered exposure time, as shown in Figure 2. It may by possible that the kinetics is changing during the oxidation process.

The optimal oxidation kinetics for temperatures 1100 °C and higher was close to quadratic, but for lower temperatures, the quadratic law do not fit experimental data well. Therefore, it was necessary to modify the “n-parameter”. The found values were within the range of quadratic and cubic kinetics, which is typical for oxidation during normal operating parameters. It was possible to interpolate the optimal “k-parameter” via Arrhenius equation

It was necessary to divide the entire range of temperatures 600–1300 °C into four sub-regions to maintain the accuracy. For having “continuous” curves, it was necessary to have different temperatures domains for “n” and “k”. Used regions approximately correspond to the physical processes in material (formation of β phase and monoclinic to tetragonal oxide transformation [7]). The new oxidation kinetics model (UJP-correlation) was proposed at the following form (1). Using value n = 0.4 below 768.4 °C gives good results (experiment vs. calculation) and it was possible to use Arrhenius equation for “k” in region 600–934 °C (Fig. 3). 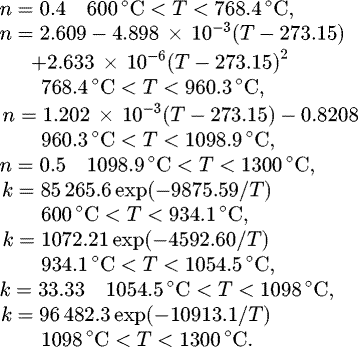 2.2 Comparison of experimental data and UJP-correlation

Calculated values and experimental data comparison are provided in Figure 4. Almost all values predicted with the new oxidation model had absolute error lower than 10%.

was the arithmetical average of R values and σ standard deviation. Δcorr was correlation error, where k95/95 was distribution factor corresponding to one-sided interval 95% at confidential probability 95% (for normal distribution law and large number of data points k95/95 ∼ 1.645). After excluding the most extreme values (approx. 1 % of all gathered data) a statistical evaluation for a total of 819 points was done. The arithmetical average

and for each temperature are summarized in Figure 5. It is evident that the calculated and experimental values are in very good agreement in the entire temperature range.

Low non-conservativism of prediction (∼10%) was observed for temperature 600 and 650 °C. Absolute values of mass gain (calculated minus experimental value) were very low (about 10 mg/dm2); therefore, this non-conservativism is not important.

The presented experimental data points were compared with existing correlation models also. Evaluation was performed for correlations based on E110 alloys Yegorova [2], Solyany [8], AEKI [9], and for Zircaloy based correlations Cathcart-Pawel [10] and Baker-Just [11] also. Very high degree of conservatism for all existing models in temperature range 800–1050 °C is evident from Figures 6–10. Prediction in this region is higher by about 120% (for AEKI and Cathcart-Pawel), while for temperatures 1100 °C and more, it is higher only by about 10–20% (for AEKI and Cathcart-Pawel) and by about 40% (for Solyany and Baker-Just). Prediction by about 20% higher can be accepted as low conservative and satisfactory. Only correlations Yegorova and Baker-Just provided non-conservative results for temperatures above 1050 °C (Yegorova ∼20%) and below 700 °C (Baker-Just 10–20%) respectively, see in Figure 10.

The presented paper was concerned with the measurement of the oxygen weight gain in the E110 cladding tubes after high-temperature oxidation. The main goal was to develop a new model for oxidation kinetics and compare experimental data with existing correlations. The following conclusions can be drawn:

Further investigation will be focused on the influence of pre-oxidation and pre-hybridization of samples. It will provide more reliable results for the fuel claddings within operation.

The chemical composition of the studied materials.